Before his passing in January of this year, Percy Keel wrote his memories of Madison's telephone history.  A subsequent article will recount the history of the telephone company itself, but this is Percy's story, as he wrote it. 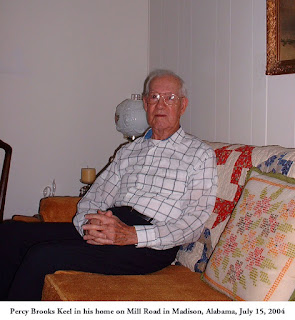 “My mother Viola Styles Keel, my brother Ralph 'Buddy' Keel, and I moved to Madison from Gurley when her nephew, Robert 'Pud' True, bought the Telephone Company in 1939 from Mrs. Woodie Collier Cain.  We had the first apartment at the top of the stairs, which were outside, at the back of the Humphrey-Hughes Drug Store building on Main Street.  The entrance to the telephone office was located on Garner Street.  The apartment had only two rooms.  One where the switchboard was located had a cot so we could answer calls at night.  Mama usually slept there, and Buddy and I slept in the other room, which had two beds and also contained the kitchen.”

“After we both entered service in WW2, the office was moved downstairs to a building behind the drugstore, on Garner Street.  The water tank was located on Martin Street, erected in 1936.  A gauge on the tank told how much water was in it.  We would keep an eye on the gauge to see when the water level began going down, as this happened quite often.  Then we would call our customers, about 25 of them, and tell them to catch some water as the gauge was going down.”

“The switch for the fire siren was located on a pole outside Humphrey Brothers store at 112 Main Street (later West Station Antiques and then Hale Fire Glass, now unoccupied).  The siren was located on top of the store so it could be heard at a greater distance.  When there was a fire someone would call, and we would run outside and turn the siren on.  As we had only one fire truck, the first one to arrive would drive the truck, and the rest would follow in their cars or trucks.  The switch was later moved to the telephone office so we wouldn't have to go outside any more.  When the new city hall and jail (now Main Street Cafe) was completed on Main Street in 1955, the siren was moved there.”

“One of my friends, John Logan Lanier, would sometimes come up for a visit.  Most of the time Mama would take some time off and leave me to answer the calls.  He and I would get into a wrestling match on the cot by the switchboard and wrestle until we gave out or someone would call.  We nearly destroyed the cot, but Mama never did mention it.  Another thing I thought was so funny.  My brother would drink coffee for breakfast.  One morning he tasted his coffee and said, 'Mama, this coffee doesn't taste like it usually does.'  Mama replied, 'I don't know why.  I made it like I always have.'  When she emptied the pot she had left the dish rag in it.  I don't remember if Buddy drank any more of her coffee or not.”

Percy went on to tell how he had always loved peanut butter and banana sandwiches.  “Arthur Humphrey, who had the store in Main Street, knew this.  When he would have some overripe bananas he would call me, and I would run downstairs by the back door and get them, hoping nobody would call while I was gone.  The most memorable thing that happened, which would change my life forever, was while working the switchboard I got to flirting with a sweet-voiced long distance operator by the name of Helen Finley in Huntsville.  (Madison to Huntsville was long distance at that time.)  We talked every chance we could.  I finally got up enough nerve to ask for a date, and she accepted.  This started a whirlwind romance, and we were married about three months later on January 24, 1947.  This romance lasted until February 2, 1997, when Helen went to be with the Lord.”  It seems that the operators of the old manual switchboards had opportunities to reach out and contact others in many ways.