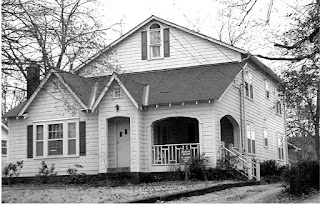 This is the home of Gordon and Monica Curry. The tax assessor's records show it as having been built in 1935, but often it is known that structures are older than those records show. It is also known that this was the home of William and Vida Wann. William was a merchant at 206 Main Street, previously the store of Dea Theodore Thomas. Wann operated the store with general merchandise from 1917 to 1940. Thomas had it from 1904 to 1917. Considering the time of Wann's merchandising on Main Street, it is believed that he may have constructed this house before 1935, but research of the history is not yet completed.

The census of 1920 shows William as age 33, born in Alabama around 1887. His wife Vida was listed then as 32, also born in Alabama. In the 1930 census, Vida was living on Front Street as a widow, making a living as a bookkeeper in a dry goods store.