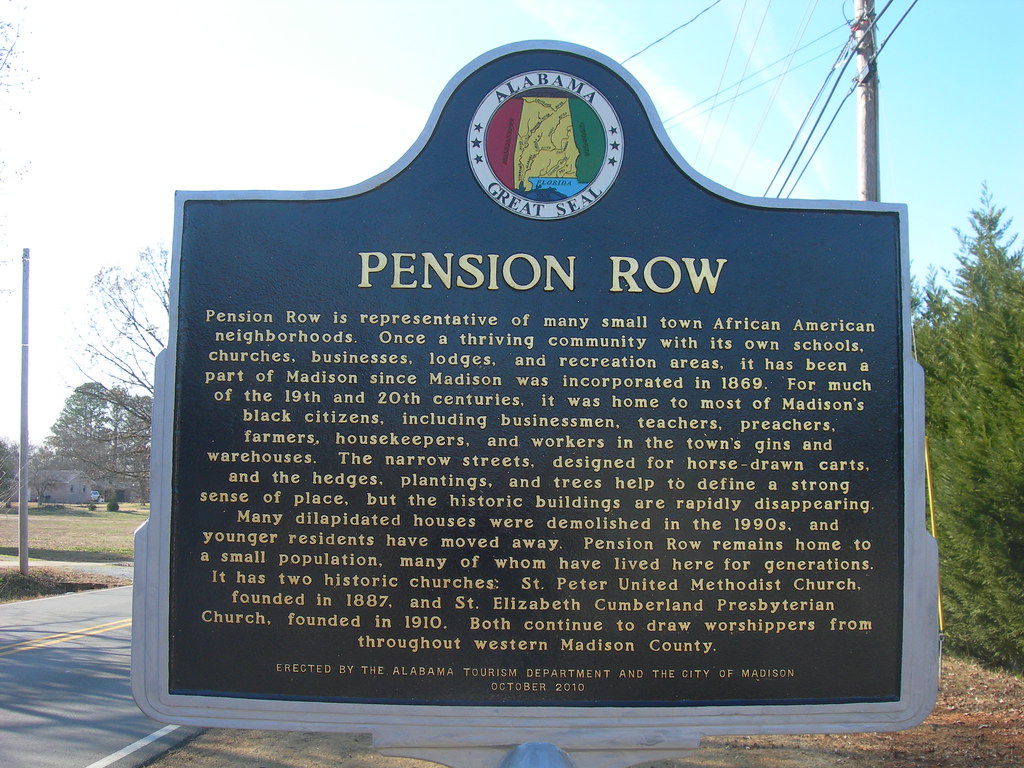 Doctor George Richard Sullivan, namesake of Sullivan Street, lived in his later years in a house on the west side of Sullivan Street near the north end of Pension Row.  The street named Pension Row runs through the middle of early Madison's westernmost development.  The name is thought to derive from a number of WW1 military veterans living on their service pensions along the street.  Prior to that time, this neighborhood was home to Madison's Male and Female Academy, which was in operation near the south end by 1883 or earlier.  Just north of that was an early 2-story Masonic Hall that was shared by a Presbyterian Church using the ground floor.  The two organizations met there on different days.

By 1926 the Masonic Lodge hall was used for the education of African American children until Cornelia, widow of blacksmith Henry Seay, deeded land on Pension Row for a new school.  In 1936 the W.P.A. provided materials, and local citizens provided the labor to erect a 3-room building.  Mr. L. C. Jamar was principal 1926-1947.  He was followed by Mrs. Dorothy Turner  for a short time, and in 1948 Rev. E. C. Binford became principal.  During his tenure, the school expanded twice, to a 5-room configuration and then to 16 rooms, with teachers for each room.  The expanded school consolidated those of nearby area schools in Triana, Capshaw, New Haven, Union Hill, Betts, and St. James, which had been meeting in churches and other lodge halls.  The Pension Row School burned in 1949 and was not rebuilt in that neighborhood.  West Madison Elementary School was constructed further north to replace it after several years, with an integrated staff and student body by the 1970s.

Information For Historical Marker:
"Pension Row is representative of many small town African American neighborhoods. Once a thriving community with its own schools, churches, businesses, lodges, and recreation areas, it has been a part of Madison since Madison was incorporated in 1869. For much of the 19th and 20th centuries, it was home to most of Madison's black citizens, including businessmen, teachers, preachers, farmers, housekeepers, and workers in the town's gins and warehouses. The narrow streets, designed for horse-drawn carts, and the hedges, plantings, and trees help to define a strong sense of place, but the historic buildings are rapidly disappearing. Many dilapidated houses were demolished in the 1990s, and younger residents have moved away. Pension Row remains home to a small population, many of whom have lived here for generations. It has two historic churches: St. Peter United Methodist Church, founded in 1887, and St. Elizabeth Cumberland Presbyterian Church, founded in 1910. Both continue to draw worshippers from throughout western Madison County."