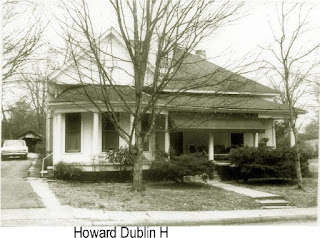 The Pruitt- Dublin house was built by Joe Pruitt around 1910. It was sold to a Mr. Fisk of Fayetteville, Tennessee. He moved back to Fayetteville and sold the place to Howard Dublin in 1937. Howard rented the house to others while he lived in Greenbrier, Alabama. Howard and his wife Sallie Williams Dublin moved into the house in 1942. Howard died there in 1972, while Sallie lived in the house until her passing in 1994.

Howard was Mayor of Madison from 1949 to 1950. He was a brother of Clyde Dublin, namesake of Dublin Park.  They were nephews of Jim Williams of 19 Front Street. They were also descendants of Roland and Elizabeth Gooch, who had a daughter (Eleanor) that married James Dublin. Their son Westley M. Dublin had a son, Westley Lee Dublin, who was the father of Clyde and Howard. It was Roland and Elizabeth Gooch who deeded land in 1838 for the Methodist Church on Church Street when it was located at Old Madison Pike and Hughes Road.

The Pruitt- Dublin House burned in 2005. It may have been the site where old timers of the town told of a little girl drowning in a cistern across from the church in the 1920's or 1930's.