This house was constructed in 1910 according to the Madison County tax assessor's records.
In 1916 it was sold by Samuel W. Balch to Ora B. Wann. Her husband Fred was never mentioned on the deed, so he may have died by then. Ora was a long-time Madison postmaster; Samuel Balch was a long-time rural letter carrier of the Madison area. Samuel married Martha A. Parson in 1875, and they had at least 12 children, according to census records, but by 1910 only 8 were still living. Samuel's father was Hezekiah J. Balch, an area pioneer and charter member of Mt. Zion Baptist Church between Nance and Jeff Roads.

Hezekiah married Tabitha Vaughn, a sister of George Washington Vaughn, connected to the Hughes
and Spencer families of Madison. Tabitha's father was Micajah Vaughn, who was a signer of the first Alabama State Constitution in 1819. Hezekiah served as the first Sunday School Superintendent at the church. His land is today the location of Kelly Springs, along Jeff Road.  Ora B. Wann has already been mentioned in association with the house at 302 Church Street. (Just imagine, Madison had an "0. B. Wann" long before George Lucas introduced a character with that name in the Star Wars movies.) The view of the Balch-Wann house below shows how deceptive the front appearances may be of the home along Church Street. The lots were very deep, so the houses were expanded behind the front faces over the years. This house is recorded in tax records as having 2456 square feet of space, typical of such homes along the street. The tax records also show that the current owner is Linda L. Marler. 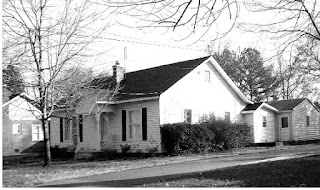