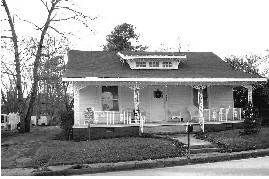 This home was built in 1917 by Douglas C. Broyles, a merchant I salesman in the town. The home is
in the bungalow style with what is called a four square floor plan , which is four rooms forming a square, with no hallway.

The original home had one bedroom. Prior to the 1950's, two small rooms were added to the back.
The home features ten foot ceilings, original heart pine floors, and rosettes at the top corners of the
windows and doors. It has two fireplaces with a third said to be hidden behind the dining room's built-in hutch and buffet.

The home has been in the Sturdivant family since the 1950's. It was home to Charles
and Kim Sturdivant for several years. Charles is the son of Jim Sturdivant and grandson
of Claude and Tiny Sturdivant who lived at 308 Church Street.