The Madison United Methodist Church was organized in 1828. A deed was issued in 1837 to the ''Trustees of the Methodist Church in U.S. of America" by Rowland and Elizabeth Gooch and was recorded in 1838. The church was located at the crossroads of the present Old Madison Pike and Hughes Road intersection, also known as Riddle's Corner and the "Old Triana Road." The church was one office churches on the circuit and remained on the circuit until 1913 when it became a full pastorate under Rev. J. Duncan Hunter who later became District Superintendent. The church was originally known as "The Methodist Episcopal Church, South."

The present site was purchased in 1873, and the church was rolled on logs to the present lo­ cation. At that time, it was a one­ room frame building. In 1947, under the leadership of Rev. Thelmer Vaughn, the building was brick veneered and the first educational units were built, including the kitchen, dining room, pastor's study and Memorial Windows. This effort was completed in April 1948. Rev. S. Allen Balch, a native of Madison, held the official opening. The Dedication Service was held on Sunday, September 2, 1951, with Bishop Clare Purcell, who served the circuit from 1910-1913, leading the service. 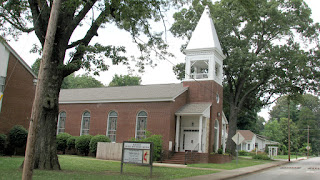 About 56 pastors have served the church from Alexander Little Page Green in1828 to our present
pastor, Rev. Bobby Ray Halbrooks, who came to the church from St. Luke United Methodist Church in Decatur, Alabama in 1996.

The following statement was made by one of the pastors to the Quarterly Conference:
"No better people can be found anywhere than those of the Madison United Methodist Church."