This structure was erected in 1954-5 as a multi-function third City Hall.  The first City Hall was the original Roundhouse.  The second was a two-story wooden building located at the southwestern corner of the intersection of Garner and Martin Streets, where George Washington Wise's house had been.  The City Hall building is visible in the upper right of the 1951 aerial photograph below.  Since the early 1990's Madison has enjoyed a modern fourth City Hall on Hughes Road, also depicted below in an aerial photograph.
The facility at 101 Main Street is a restaurant, with an outdoor pavilion and inside seating, including two of the 1950's jail cells. 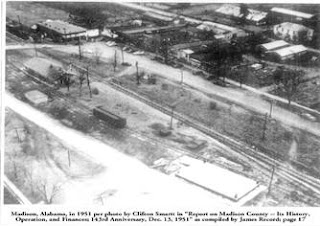