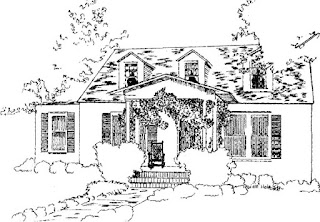 constructed on a parcel of land which was owned by Joseph's father, M. Samuel Balch. Joseph A.
Balch, Sr., was a rural letter carrier in the early 1900's. He used a horse and buggy and a motorcycle to deliver the mail.

The home displays a Colonial style with its steep, pitched roof and gabled dormer windows. A grove of oak trees at the site provided the framing materials to build the home.  Renovations to the interior have revealed that the interior walls are gumwood. The wooden walls were covered with a thick, felt-like material over which wallpaper was placed.

The addition and renovations done by the Rivers have blended a modern kitchen and bath updates
with period woodwork and decor. The two original fireplaces were restored and converted to gas.
Original oak floors were restored throughout the first floor and matching wood floors were used in the addition. In the two-story addition, the downstairs features a gourmet kitchen and a master bedroom suite. The upstairs features two baths, a bedroom, a study and a large playroom.