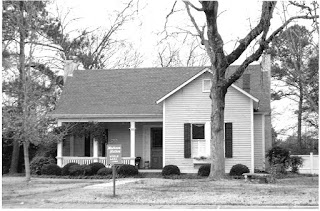 The Wikle-Lipscomb-Lanz home is one of the oldest homes on Church Street. It was built circa 1880 by Elizabeth Perkins. It was sold that same year toM. L. Hardage who in turn sold it to Mariah Louise Apperson in 1902. The home was sold again in 1904 to one of Madison's early, prominent citizens, Dr. Luther L. Wikle.

Dr. Wikle was an 1888 graduate of the University of Tennessee and used the home for his medical office from 1904 until he and his son, Dr. Jesse Ollie Wikle, joined their practices and moved to the second floor of the drug store at 210 Main Street in 1923.

Dr. Wikle married twice, the second time to the former Dicy Jane Armstrong who died in Madison in
1939. Dr. Wikle continued to practice until his death in 1941 at the age of 86.

The home displays some interesting historic elements in the original L-shaped floor plan. The one story home with a metal, gabled roof has a front porch which extends across the front of the house. A massive eight foot front door with stained glass panels leads into the foyer. Rooms on either side of the foyer have twelve foot ceilings. The design of the original home was called a" dog trot" design.