When Madison was established in 1857 by the sale of lots in the town planned to be called “Clemens Depot” by initial landowner James Clemens as his namesake along the railroad, it consisted of only 55 total lots.  Of these, 29 fronted to some extent along the railroad, intended by Clemens to serve as “storefronts” and called such by the fact that an owner would operate a store in the front of any structure, while living with his family in the back.  Later, about a dozen of these 29 lots would hold only residences, but even some of the lots not fronting along the railroad had stores at various times in the 1800s. 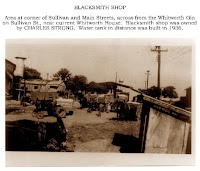 Today the old business district includes various retail and commercial establishments along Main Street and a few more around the intersection of Church and Front Streets.  However, there are a couple of old homes along Main Street, one of which has been converted entirely into business operations. The additional residences along Church, Martin, Arnett, College, Maple, Martin, and Sullivan Streets are also considered be in the historical district, but these locations are typically not occupied for commercial enterprises – still with a few exceptions for businesses.

Main Street itself was not given a name in the plat by James Clemens.  It is known that on the 1890   Clemens' plat showed Lots 1 – 13 from west to east along the south side of today's Main Street.  It also included Lots 46 – 48 on the eastern end of the street, where it connects with the southern end of Church Street today.  Church Street was initially called the Huntsville – Triana Pike after it got any name at all as part of a county road.  Today's Garner and Wise Streets were not shown on the original plat.  They were later created from alleys taken from the bounds of various lots along their routes.  Martin Street was shown on the original plat, but it had no name initially.
Hartford Insurance Company map of Madison, this street was titled as “Broadway” and what is today's Front Street north of the railroad was titled as Railway Street.

Lots 1 – 13 along Main Street were typical of Clemens' plan for storefronts facing the railroad, as were Lots 14 -23 along today's Front Street.  That plan laid out lots that were 66 feet wide and 198 feet deep.  This was based upon the 66-foot length of the standard surveryor's chain for measurements – one chain wide, three chains deep.  This choice of lot dimensions allowed for a dwelling structure to be constructed for merchants that would measure basically up to 66 feet wide and 66 feet deep.  The front of such a structure would be used for merchandising, facing the street and the railroad.  The next 66 feet of depth in the lot would nornally be used for such things as a cistern, possibly a chicken yard or coop, and perhaps a small vegetable garden.  The back 66 feet of a lot would be used for pasture for a milk cow or a horse, plus the location of an “outhouse” (outdoor toilet) as far from the living quarters as possible in the lot.  Apparently, James Clemens envisioned a town populated by merchants in the most favorable locations for such livelihoods.  Other lots were mostly of varying dimensions, as can be seen in the plat.