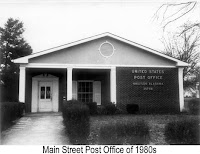 The building now on this site was constructed as a post office and dedicated by pharmacist and former mayor George Walton (“Doc”) Hughes on May 6, 1962.
Since the relocation of the Post Office, businesses and a church have occupied the space.  The lot was the original location of the store owned/operated by George Washington Wise.   George's brother James Arthur Wise was his partner.
James and his family lived in the house at 16 Main Street for several years.  The store was torn down after 1910.  George Washington Wise was a son-in-law of Madison's first merchant, George Washington Martin.  G. W. Wise lived just a short distance away, across Martin Street.