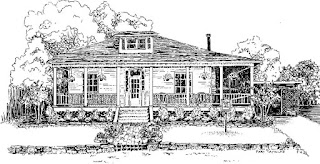 Built just after the turn-of-the-century, the Thorson home displays all of the features repeated in many Madison homes. The Roy W. Thorson family lived in the home for many years. They were farmers.  The home is a one and one-half story with a hipped roof extending over the veranda which is supported by six Tuscan columns. The entrance has a transom and sidelights that extend to the transom.  The large front windows feature a beautiful leaded glass design across the top.

Ms. Joan Lynch Spruiell purchased the home in 1980. In 1981 , she had the plumbing and electrical
completely updated. Today, she and her husband, Scott Haas, live in the home; they were married in
1984.

Joan and Scott replaced the original tin roof with shingles and turned the unfinished attic into a master bedroom suite in 1986. They also replaced the missing, original banister around the veranda
in 1992. 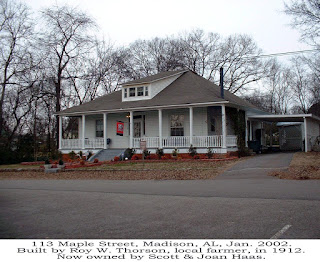