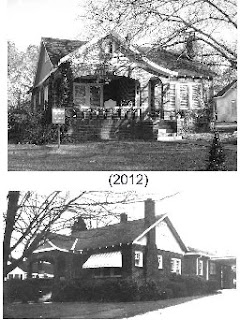 Caudis H. Tribble and Ozelle Hereford were married in Madison County in 1924. Their house in Madison is recorded in the tax records as having been constructed in 1939. When Gladys McFarlen True and her husband "Pud" moved to Madison, the couples became close friends. After a year of renting rooms in a house on Front Street, Gladys wanted to live next door to Ozelle, and the feeling was mutual. The Tribbles gave the Trues a deed to the corner lot beside them without a penny being paid.

Still, Gladys and Pud paid their friends for the lot within a year.They built the house shown below within a year their house payment was $29.50 per month. The Trues owned and operated a grocery store at 208 Main (later Bandito Burrito and now part of Old Black Bear) for over 30 years, remaining lifelong friends with the Tribbles.

The Tribble Home is now owned by Geoffrey and Karen Beech.