Built in 1910, the Farley-Sturdivant home was constructed on land granted to the State of Alabama 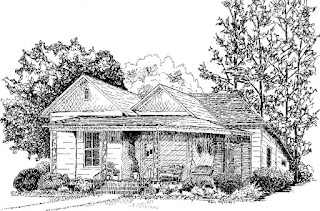 The Sturdivant's purchased the home on August 7, 1943 from Mr. and Mrs. W. C. Gatlin. The Sears and Roebuck home is in the Victorian style with a gable roof. The apex of the gable features carved
fish scales and diamonds. The wrap-around porch has original gingerbread trim on engaged columns.  The other columns were replaced with wrought iron and the original weather board was covered
with asbestos singles.  Mr. and Mrs. Claude "Tiny" Sturdivant had two sons, Claude L. Sturdivant, Jr. and James G. Sturdivant.

Mr. Sturdivant was the son of the late Robert L. "Bob" Sturdivant who was mayor of Madison for a
number of years. Mrs. Sturdivant is the daughter of the James C. Gormley, who was a depot agent and city clerk. Mrs. Sturdivant's Grandmother Gormley was the sister of Dr. George R. Sullivan, an early physician in Madison.