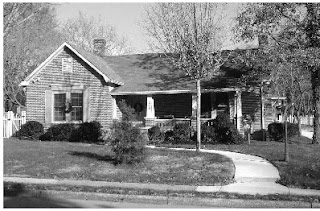 Roy and his wife Ada purchased land adjoining both Cora Mae and Nina Garrett on the east side of Church Street in 1918-1919. Since the house at the right is recorded in the tax records as having been constructed in 1918, Roy may have built it. However, later in 1919 he and Ada sold their land to Ora B. Wann and to John Mullins Burton, so they were not here long. Yet, today part of the area along Church Street and Mill Road is called the May Development on court plats.

Our local Howard Hughes and his wife Lorene Howard (married in 1931) owned this house. 33
Howard died in 1971; Lorene passed away in 1999. Today's owner is Harriet Hess Polskoy.