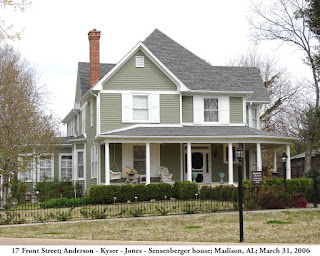 Matthew Harvey Anderson, Merchant and Director of the Bank of Madison, built this house sometime after July of 1904, the date when he purchased Lots 23 and 24.  It was occupied by Dr. James Allen Kyser for about 50 years before falling into neglect.  Tony and Cindy Sensenberger purchased the ready-to-collapse structure at auction in 1997.

The house is located on original Lots 23 and 24, including possibly part of Lot 22 in the yard.  Lot 24 was first purchased from James Clemens by carpenter Edmund “Ned” Martin on 5 March 1860, just about three months before Clemens’ death and about a year before the start of the Civil War and the associated Emancipation Proclamation. It was the last lot sold by Clemens himself. Edmund was a “free man of color” per deed recordss and the 1860 census. That census showed that Edmund was thirty years old, had a wife named Sarah at age forty-five and a daughter named Lucinda at age nine, all born in Alabama. They were enumerated in a complex of free black households clustered around the house of blacksmith William T. Dunnivant, who lived next door to Theodorick Clay, who lived on today's Front Street at the west side of Buttermilk Alley. Additional data in the Madison County deeds show that Edmund Martin was born in Morgan County.  He was living in Valhermosa Springs of Morgan County at the time of the 1870 census.

It may be that events related to the Civil War led to Edmund Martin abandoning Lot 24 or otherwise leaving Madison. The fact is that after the Reconstruction-era chancery court’s handling of the Clemens estate in 1868, physician and depot agent William Dunn sold Lot 24 to Bettie Turner. She was noted as his “coloured” servant in Deed Book JJ, pages 455–6. The sale was witnessed by Richard A. Wiggins and his son, Robert E. Wiggins. Richard's wife, Jackey G. Dunn. Wiggins, was a sister of William Dunn, who was enumerated in Richard’s household in the 1850 census. The Wiggins plantation was located near the southeastern corner of the Martin Road and Wall-Triana Highway intersection. After leaving the Wiggins plantation, Dr. Dunn may have initially lived in the first depot building, or he may have built a house on Lot 24, where Bettie would later live.  It is known that Dr. Dunn lived on Martin Street in the 1860 census.  Dr. Dunn's last house is known to be incorporated into the large house next door at 19 Front Street on Lots 20 and 21. Dunn purchased Lot 19 in January 1860, so he may have lived there for a time.  He also owned Lots 22 and 26–28 north of Front Street before his passing in 1871.

During the Civil War, Dunn had a “movie script” experience. According to the 1913 special edition of the Huntsville Weekly Mercury newspaper that related the history of Madison, when the Union army first occupied Huntsville and wanted to go by rail to Decatur, they feared sabotage and attacks along the way.  When they reached Madison, which was not yet occupied by Union troops, they took Dr. Dunn and tied him to the front of a flatcar placed ahead of the engine.  The theory was that if a derailment or an attack came, he would be the first to suffer. The federals also suspected that Dunn had information that he would not tell. It turned out that the tracks were sabotaged, and the federals were fired upon as they reached Beaver Dam Creek, west of Madison. When the car with hostage Dunn left the tracks, he became dislodged from his bindings and fell into some bushes, where he hid until after the ensuing skirmish. The Union forces found him frightened but unhurt. Soon thereafter, Madison itself was occupied by Union forces, during which time there was no post office, and only the Federal's supply store was allowed to operate in the town. Of course, the men who owned the other stores were all gone to serve in the Confederate military. Growth and commerce in Madison were halted during the war, but they quickly returned at the end of hostilities.

In 1871, just weeks before his death, William Dunn also sold Lot 23 to the same Bettie Turner for use “during her lifetime,” per Deed Book RR, page 584. After Turner’s death, in December 1901 Mrs. Annie E. Wiggins Sanders filed a copy of Turner’s last will and testament with the probate court. The filing showed that Turner had died with no heirs or next of kin and that she left all her property “of any kind” to Mrs. Sanders. The original of her will had been given to Dr. Isaac F. Deloney for safekeeping, but he had moved to Leighton in Lawrence County and misplaced the will, according to his testimony. The copy held by Sanders was validated by her uncle, Dr. William Dunn (before his death), and by Dr. A. S. Harris of Madison. Thereafter, Lots 23 and 24 began a new series of ownership, becoming the property of Matthew Harvey Anderson in 1904.  Harvey Anderson was one of the Directors of the Bank of Madison which was founded in 1904.  He also was a principal partner of both Anderson–Bronaugh & Company and the Hertzler–Anderson Company.  Both businesses were general stores which, according to the 1905 Alabama Merchantile book listings, sold groceries and other merchandise -- there being 12 such listings in Madison.  Harvey and his wife, Annie Hertzler Anderson, were both from Ohio with Pennsylvania roots.  In fact, Annie’s father, Dr. John Hertzler, also came to Madison from Ohio following the Civil War.  Annie's brother, Frank Hertzler, later built and lived in the house at 25 Front Street.

After constructing a large house on the lot along Front Street, the Anderson's sold it by 1926 to Dr. James Allen Kyser. Dr. Kyser was recognized by the U.S. government for helping to bring the 1918–9 flu epidemic under control in north Alabama. The Kyser family lived in the house for nearly fifty years, and then it was purchased by Billy J. and Nancy Jane Jones of Huntsville.  In 1997, the collapsing and abandoned old house was purchased at auction by Tony and Cindy Sensenberger. They lovingly restored and expanded it, keeping as much of the original structure as possible. Today the house has surpassed even its former glory. 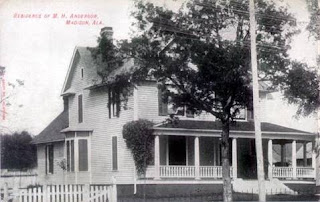