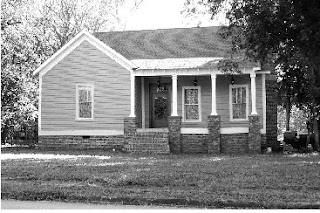 This historic home has recently been extensively and impressively restored, remodeled, and enlarged by Teddy and Rikki Powell. It originally was built by Arthur Holding Lewis, a son of Meriwether A. Lewis of Triana. Lewis descendants say that Meriwether owned three steamboats to carry cotton to market from his plantation. It is believed that beams from one of the salvaged river boats formed the foundation of this house. Arthur Lewis had a store at the 104 Main Street location that is now a parking lot. Arthur married Mattie Cartwright after a short, but strange, courtship, and their family includes ties to the local Humphrey and Spencer families, as well as ancestral lineage back to George Washington's grandfather.  There are definite indications that this home was initially constructed by A. H. Lewis in 1873, possibly as a condition of getting Mattie to marry him.

The Lewis home eventually was owned by Fred and Ora B. Wann. Fred worked as a clerk in the post

office, while Ora was the postmaster for many years. To the right is an older photo of the house from the Historical Society files.