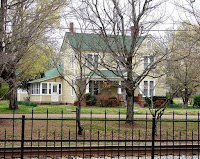 Sarah Russell Clay, Civil War widow of Andrew Clay, was the first owner of Lot 7.  However, she initially lived on the south half of Lot 7, later dwelling on Lot 9.  The north “part” of Lot 7 was deeded by Sarah to Thomas and John Hopkins, grandsons of Alabama's second governor Thomas Bibb, acting as agents for a Protestant Episcopal Church.  The deed stipulated that the property was to be used as a "Poor House" for widows and orphans of soldiers and other destitute persons.  The occupations of subsequent owners indicate that the structure was used through the years not only for family residences, but also probably as Madison's first hotel, mortuary, hospital, museum of fine china, and art gallery.


Today the structure is the business location of Studio 106 and several other enterprises.

It is not clear as to whether or not a Protestant Episcopal Church was ever built on the lot after Thomas and John as trustees purchased the north part of Lot 7 in 1874.  However, it is certainly possible that the original structure at the location did serve as a church and/or an orphanage for a time.  It is further known that Thomas B. and James B. Hopkins were two of the group of five or more men who in 1884 formed a committee to incorporate a public school that had begun operations in 1883 as the Madison Male and Female Academy.  The school was located in the area along what is now the southern end of Pension Row on the west side of Sullivan Street.

The Hopkins family members associated with Lot 7 of Madison have a rich history in the town and in  These local Hopkins men were grandsons of Governor Thomas Bibb through his daughter and youngest child Eliza, which probably accounts for their middle initials as “B.” for Bibb.  They no doubt would have attended various parties and social functions in Huntsville and in the nearby Limestone County community of Belle Mina, where Governor Bibb had impressive homes.  Eliza married Arthur Mosely Hopkins, whose father Arthur F. Hopkins (1794-1866) served as a chief justice of the Alabama Supreme Court and as a U. S. Senator for the state.  He was also the President of the Mobile & Ohio RailRoad.  Arthur Mosely Hopkins fought for the Confederacy in battles at Selma and in Tuscaloosa.  His own accounts of participation in the conflicts can be seen in correspondence contained in the Frances Cabaniss Roberts Collection of the Special Collections Archive of the Salmon Library at the University of Alabama in Huntsville.  Images of the correspondence may also be accessed via the Internet on the website of the University or by selection of the Roberts Collection at dkdayton.net for as long as that private server hosts the digitized data.
the state.

In the 1840s there was a firm of Bibb & Hopkins operating in Huntsville, probably involving the governor and Arthur F. Hopkins.  During the 1870s and 1880s there was the firm of “John W. Hopkins & Brother” doing business in Madison as grocers, dry goods, and cotton buyers.  There was a “sister” store also in Nashville, Tennessee, involving Hopkins.


The 1870 census shows Eliza Hopkins as 48 years old, a widowed head of household in Madison with her son Thomas B. at age 25 living in her house.  Next door was the household of John W. Hopkins at age 29 with his wife Anne and two children.  Thomas and John were both listed with the occupation as retail grocers.  Eliza's occupation was given as seamstress.  John was also the administrator of the estate of prominent Madison merchant Charles H. Rhea in the 1870s.  By the late 1880s the Hopkins families sold their properties in Madison and moved away.  An 1887 deed shows James B. Hopkins and his wife Madeline selling Lots 21, 22, 24, and 25 to Isaac Hoffman, including a notation that parts of the property had been owned by the Cumberland Presbyterian Church.  That church had moved into a building shared with the local Masonic chapter under an agreement that specified the days each organization would have use of the structure.  The building was also located in the Pension Row area.

Prior historical accounts from verbal memories and tradition have attributed the structure now designated as the Clay House on 16 Main to be the house of Sarah Russell Clay.  However, later in- depth research has proven that she never actually occupied the north half of Lot 7.  Yet, she did in fact purchase the complete Lot 7, but she then soon sold the north half of it to the Hopkins brothers.  Land deeds indicate that Sarah also owned Lots 8 and 9, residing on the southern half of Lot 7 for a time, then living on Lot 9 at the time of her passing in 1886 when her daughter Maggy Clay Gray sold the rest of the lands that she inherited to James Arthur Wise, brother and store partner of George Washington Wise.