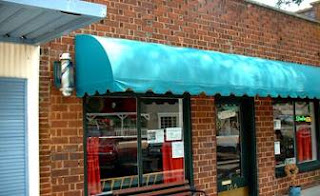 Elbert and Opie Balch operate a realty company in this building now, also containing an office for their son, Matthew J. Balch, Attorney at Law.  The present building had been constructed as a post office in 1928.  It served that function until the early 1940s when it was moved to the Dea T. Thomas building at 206 Main Street.

The building at 106 Main was then sold to Robert Shelton for his barbershop following the 1942 fire in Jim Williams' store building at 100 Main.  Shelton's barbershop was operated by his son Hoyte Shelton after Robert retired.  Hoyte lived at 114 Church Street and died in 1997.  Then the  building was inherited by Teresa Reed and Pat Whitworth, his nieces.  For a while the building was operated as a florist shop, then leased to Dana Burrows for her hair and nail salon business called Studio 106.  In 2012 Studio 106 moved to 16 Main, perhaps in a sense losing only the “0” from the name.