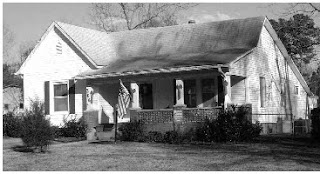 This was the home of Cora Mae Lewis and her husband James Hermon Humphrey,
a son of James Alexander Humphrey. The tax records show that the house was built in 1898,
which is the same year as of their marriage. The home may have been built as a condition of the marriage of Cora Mae to James.

Cora Mae was a daughter of Arthur H. Lewis, who married Mattie Cartwright after a rather
strange courtship. Mattie was a daughter of Hezekiah Bradley Cartwright, son of area pioneer John Cartwright. Cora Mae's lineage went through Arthur Lewis to the Meriwether A. Lewis of Triana and has been traced back to the grandfather of George Washington.

Cora Mae and her husband James, sold land adjoining their residential home site to Roy and Ada L. May in 1918. This land would later become the home site of 208 Church Street.