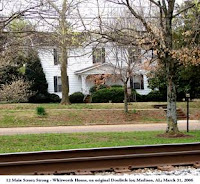 The house at 12 Main stands on Lot 2 of the original town plat of James Clemens' land that became the City of Madison.  Lot 2 was first purchased at the October 5, 1868, Clemens estate auction by Hamilton G. Bradford.  The property changed hands many times until Seymour and Indiana Doolittle built their home here.  They also purchased in an 1876 auction the adjacent Lot 1, which had been bought at the 1868 auction by John J. “Studdivant” (Sturdivant) of Limestone County.  The Doolittles likewise purchased Lots 3 and 4 that had initially been purchased by Theodorick S. Clay, a brother of Thomas J. Clay and Andrew Clay, all of whom appear in the history of Madison.  Andrew died in the Civil War while his family lived in Limestone County in the Shoal Ford area.  However, Andrew's widow Sarah Russell Webb Clay moved into Madison and ended up purchasing Lots 7, 8, 9, and 10 by 1869.  Theodorick and his wife Jane purchased Lots 17 and 18 for their house across the tracks near Thomas J. Clay.

Sarah Russell had married Robertson Webb, a man 41 years her senior.  In the 1850 census she was 24, and he was 65.  They had several children together in addition to being guardians of the three Clay brothers, who were children of Robertson's sister (or daughter?) Nancy Webb Clay.  After Robertson passed away, Sarah married Andrew Clay, one of the matured children that she and Robertson had raised, but who was still closer to Sarah's age.  More of Sarah's story is told in relation to the Clay House at 16 Main Street.

The Doolittles built a log house on Lot 2 and operated a large blacksmith shop on their adjacent   However, in Madison County of Alabama he married for a second time in 1875.  His second wife was American Indiana Pocahontus Gewin, a member of the Gewin family who lived with the Chickasaw Indians in Mississippi for a time but became a postmaster family of long duration in Madison from 1875 to 1915.  In 1902 the Doolittles sold Lots 1, 2, 3, and 4 to Charles and Maggie Strong and J. A. Strong (an unmarried man).  The Strongs were also blacksmiths, and they added a gasoline-powered gristmill to the blacksmith operation on the property by 1913.  The original Doolittle log home burned in 1905, but with help from the townspeople, a new house was constructed on the lot within the same year.
properties with Seymour's brother Jared. Seymour Doolittle was born in Connecticut, where he married for the first time and then had children born in Michigan.

The Strong house was extensively remodeled by Thomas and Sara Landman Whitworth, who purchased it in 1952.  Both Whitworths passed away in 2008, and then the property became owned by Lottie S. Downie but occupied by David  Ballard and Daniel Stagner, co-owners of the Animal Trax exotic pet store beside the railroad tracks on Church Street in Madison.  Still, the older residents of Madison associate the house at 12 Main with Sara Whitworth as its resident owner of many years.

Sara Landman Whitworth was a descendant of William Landman, who is buried on Redstone Arsenal in a family cemetery on his land.  William was a son of a German immigrant, and he patented 160 acres of arsenal land in 1813, owning 240 acres by 1815.  His children included Perlina, who married Joshua H. Beadle, a prominent Madison-area landowner who had a store in Huntsville.  Another child of William was George Landman, who lived beside three Beadle families, including Abraham Beadle and his nephew Joshua.  George had a son James Henry Landman, who worked as a clerk for six years in the store of Joshua Beadle.  James was later assistant quartermaster in Confederate General Nathan Bedford Forrest’s command.  James became Madison County’s Tax Assessor in 1880.  By his second wife, James had at least four sons, including Charles T. Landman, who was the father of Sara.

Thomas Jerome Whitworth was licensed to marry Sara Landman on March 1, 1950, per Madison County Marriage Book Volume 95, page 22.  Sara Whitworth was best known to Madison residents as the owner of Whitworth Realty, operating out of the oldest storefront in town, at 110 Main Street.  As advancing years curtailed Sara’s active business participation, her realty office became for a time an art gallery of her son “Jerry” (Thomas Jerome, Jr.), of Paris, France.  Jerry himself paints, as well as collecting art in Europe and New York.  Another son, Dr. Charles Darwin Whitworth, is a local veterinarian, who lives in a house on Mill Road that incorporates and preserves the two-story log cabin of James and Sarah Bailey.  That log cabin is almost certainly the oldest house in the Madison area, if not all of northern Alabama.  It is believed to date back before 1818, when it served as the first stagecoach stop on the route from Huntsville to Mooresville at Bailey Springs.

John David Whitworth was a son of William Whitworth and Mildred Bowers, who were married in 1858.  Mildred was a daughter of David Bowers.  William’s middle name is reported as Jason, Jansen, and Jefferson in various records.  He was a son of Daniel Whitworth and Elizabeth Dedman, who were married in 1833.  Elizabeth was a daughter of Madison County pioneer Francis Dedman.   Of John David Whitworth’s siblings, Mattie Susan married Madison entrepreneur Jim Williams and lived at 19 Front Street, Laura married William Dublin, Ada married William Tell Gooch (brother of Mattie Gooch Tribble, mother of John David’s wife Emma), Archie married Mattie Trotman, and Charles Hatton married Maggie Donaldson.  John David’s father William J. had siblings Samuel Thomas, James Edmund, Elizabeth, Martha Ann (married Charles Carter), Powhatan, John, and Carter or Cortes (also known as Toby) Whitworth.  Samuel married Ann Carter and was severely wounded at Cold Harbor during the Civil War, while Powhatan was killed at Chickamauga.  Daniel’s father was Rowland Whitworth, earliest known of the line.  Rowland married Martha, a daughter of Daniel Walthall, in Virginia in 1790.  Their children besides Daniel were Jane, Thomas (who married Susannah Winn), Nancy (who married Walter Aday), William, Sophia, Elizabeth, Edmund, and John (who married Francis Alice Watson).  John, Edmund, Elizabeth, and Nancy are all known to have come to Madison County, as well as Daniel Whitworth and his descendants.  Perhaps no other pioneer family was so extensively integrated by marriages into the fabric of Madison.